Federal Government, through the Nigerian Electricity Regulatory Commission (NERC), has approved the immediate review of electricity tariffs across the country.

NERC announced this in a series of documents obtained byChannels Television on Saturday.

The documents dated December 31, 2019, were jointly signed by the NERC Chairman, Joseph Momoh, as well as the Commissioner for Legal, License, and Compliance, Dafe Akpeneye.

The review of the amount paid by various categories of electricity consumers indicates an increase that ranges from 59.7 per cent to 77.6 per cent.

Consumers classified as residential (R1) were, however, excluded from the review as the N4 per kWh they pay was left unchanged.

The development affected the 11 Distribution Companies (DISCOs) spread across the country such as Abuja DISCO, Benin DISCO, Enugu DISCO, and Eko DISCO.

According to the latest order, the new amount to pay varies among categories of electricity consumers such as residential, commercial, industrial, special, and lighting.

A majority of Nigerians fall in the category of residential consumers who are those using singe phase and three-phase meters, as well as electricity consumption of about 50 kWh in premises with flats exclusively for residential purposes.

Similarly, those involved in agriculture other than agro-allied enterprises involved in processing, water boards, and religious houses, among others are categorised as special electricity consumers.

NERC explained that the new order was based on the actual changes in macroeconomic variables in generation capacity as at October 31, 2019.

It added that the order was based on the exchange rates of N306.9 plus one per cent premium which is about N309.97 to the dollar and gas price of $2.50 per million metric tons BTU and gas transportation cost of $0.80 per MMBTU.

See the breakdown of the reviewed amount to be paid by various categories of consumers in their respective states below:
href=”https://www.channelstv.com/2020/01/04/nigerian-govt-increases-electricity-tariffs/review-3/”> 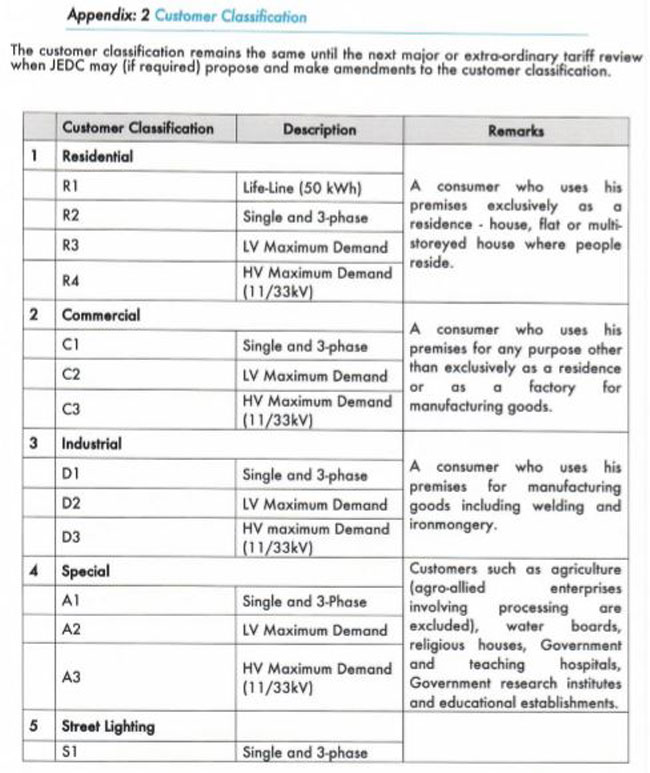